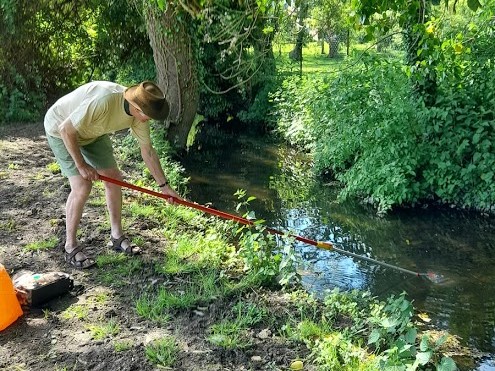 The highest bacterial counts were found in the treated effluent emerging from the Haslingfield Wastewater Treatment Works (a.k.a. Sewage Works) above Cambridge, and even a few hundred metres downstream of the treatment works, the contamination levels were still high.

We found moderate counts of faecal indicator bacteria above the Haslingfield Treatment Works. As these got worse further upstream towards Melbourn, Haslingfield is clearly not the sole source of bacterial pollution in the Rhee and Cam. We plan to investigate this during 2022

Faecal contamination levels were much higher in August than in June, probably mainly because there was much less flow in the river to dilute the effluent from the water treatment works.

The counts declined further downstream towards Cambridge, with some localised increases along the way resulting perhaps from faeces from animals, birds or other sources. Two tributaries contributed some faecal bacteria, another was apparently very clean. By the time the river reached the centre of Cambridge, counts were lower. However, note that drinking water at the tap should have no E. coli at all, and none of our samples were that clean.

Pollution from Nitrate and Phosphates

We also monitored nitrates and phosphates which are the main contributors to eutrophication.

Nitrate levels were high at every sampling point in 2021. This is because nitrates have long been at high levels in the aquifer, leached down through the soil profile from arable fields decades ago. To try to prevent further increases, ‘Nitrate Sensitive Areas’ were set up in 1990, followed quickly by ‘Nitrate Vulnerable Zones’ to try to control nitrogen losses from farms, but it will take decades to clean up the aquifier.

Phosphorus (as in phosphate) comes largely from effluent discharged from sewage treatment works into our rivers, and a legacy of overuse of agricultural fertilisers in the past.  Excessive winter rainfall washes phosphorus thats bound to field soils and ditch sediments into the river.  Recent significant reductions in levels in sewage effluent have been achieved and new regulations will force further reductions through more investment in infrastructure to capture more of the phosphorus. Water companies need to be encouraged to reduce effluent levels to the Technically Achievable Limit which has recently been tightened.

All sampling points in 2021, except Vicar’s Brook were in the EA’s ‘poor’ category for phosphate.  Vicar’s Brook phosphate level was low (i.e. excellent) because the water source is the spring head at Nine Wells which is fed from the aquifer.

Together, the levels of nitrate and phosphate were high enough to create eutrophic conditions at our sampling sites in the Rhee, Cam, Granta-Cam and Bourn Brook

For more detail, see the maps and test results here